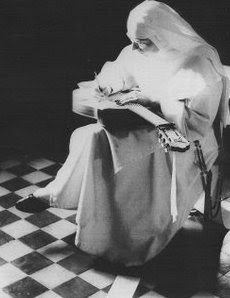 The dark sky is navy blue, and split by the thin golden crescent that is the moon. I stare at the crisp curve, shining eye to eye with me.

Soon it will be sunrise, and I will have been sitting here, awake, staring out the window, all night. I am dressed head to toe in white, as Sister Teresa brought me a brand new habit, pristine.

It occurred to me that maybe she was thinking, I need to be clean when I go to my death next week.

There is no more hope now. The reply from Stoneman has come. In one sentence, the Governor of the State of California dropped me, sent me tumbling into oblivion. This man, known to have pardoned so many, gave not a word of explanation in rejecting my plea. In just one stiff and official sentence, he has done me in, turned me into Stonewoman and sent me rolling. I have no possible escape from the gallows now.

If I were in a normal state, I suppose I would have cried yesterday when Kitty carried the thin white envelope into the house. It was shortly after noon. The mail always arrives by stage by 1 p.m.

As soon as I laid eyes on Kitty, I knew instantly that the news contained inside the envelope she held was not good. Her pasty white face. Her wide eyes, locked onto my own.

She blinked, and without untying her black bonnet,

or taking off her cotton gloves, she dropped onto the straight back chair. She sat there, all in black, holding the envelope, and the letter. She kept blinking, and I was thinking the worst. After all, she looked as though she might just dissolve in tears. Finally she got one short breathless sentence out.

"My dear Renata," she said in a hush, "Governor's decision has come and I..."

She stopped again. I was sitting there on the sofa, the guitar in my lap. I had been, oddly enough, strumming an alegría, a happy melody to which Señora had once sung some wonderfully silly lyrics about a goat who kept appearing, day after day, in a young woman's garden. The goat turned out to be a suitor.

But watching Kitty's face, it was impossible to continue strumming.

She raised one gloved hand to her face. "I have some very bad news," she whispered.

I felt a kind of numb veil descend over me. I could say that I wasn't surprised, but I wasn't. But I also couldn't quite believe that what was happening was real. Everyone else -- or should I say Kitty and Teresa -- were feeling so hopeful when they sent the petition, and the supporting letters to Stoneman's office last week.

I had, in spite of myself, allowed my hopes to rest in the arms and faith of my two friends.

Now, that hope was gone. My life was as much as ended.

"Read it to me Kitty," I said. My voice was steady and strong, but it had a shredded quality, as if it had been scraped with a knife.

She sat there, staring.

She read: "The petition for clemency in the sentence against Sister Maria Rosa Renata, convicted for the murder of Señor Quiero de Lopez, has hereby been..."

Her voice trembled. It took a full minute before she finally spoke the word. "... denied." Her chin dropped to her jacket, and I could see the tears falling.

I turned away. I saw a large yellow cloud passing by the window. I allowed my mind to be carried up there, to rest in the cloud.

I had not been allowed outdoors for weeks. I thought to myself, at least, I will be hanged in the sun. At least when I take my last breaths, I will be inhaling fresh air. There is, at least, that. I tried to think something beyond that thought.

Kitty was crying and trying to take a seat next to me on the sofa. She was trying to take me into her arms. I ought to have let her, but I wanted my space. I pushed her away.

Finally, she rose. Sniffling, wiping her nose with her hanky, she asked me if I wanted tea. I shook my head slowly. no. "I only ask that you to leave me in peace. Please. You owe me that."

And so she did.

After when she was gone, I didn't pray. I just lay on the sofa and stared at the clouds passing by the window. I could have done that all day.
Posted by Claudia R at 1:55 PM